Get in touch with Apollo to learn more about our fund.

A wave of skepticism and scrutiny has followed Libra’s announcement in June this year. Almost everyone has jumped on board the ‘bash Facebook’ train.

Surprisingly, indirect help for Libra’s project came a few days after the hearing, from the most unlikely of sources.

The reasons were clear for launching Libra as a consortium rather than one company such as Facebook. A highly valued characteristic of crypto assets is a certain threshold of decentralisation. At Apollo Capital, we carefully analyse the level to which a crypto asset is decentralised, seeing greater risk in assets that are too centralised. Unlike fiat currencies which can be debased by central banks or censored by oppressive States, valuable crypto assets typically cannot be controlled by one central actor. Libra’s goal to grow to 100 members is an attempt to demonstrate that it is sufficiently decentralised. Libra is not Facebook’s project, Facebook is merely one member.

Two weeks ago the Libra Association formed with 21 member organisations. 7 dropped out since the initial announcement. A number of commentators have used this to suggest that the project is on shaky grounds. Our view is that a number of members decided to drop out because of the backlash against Facebook and the project. A few companies including Visa, Mastercard and Stripe received letters from Senators asking them to rethink their involvement in Libra. If they didn’t, their existing business would come under intense scrutiny from regulators. 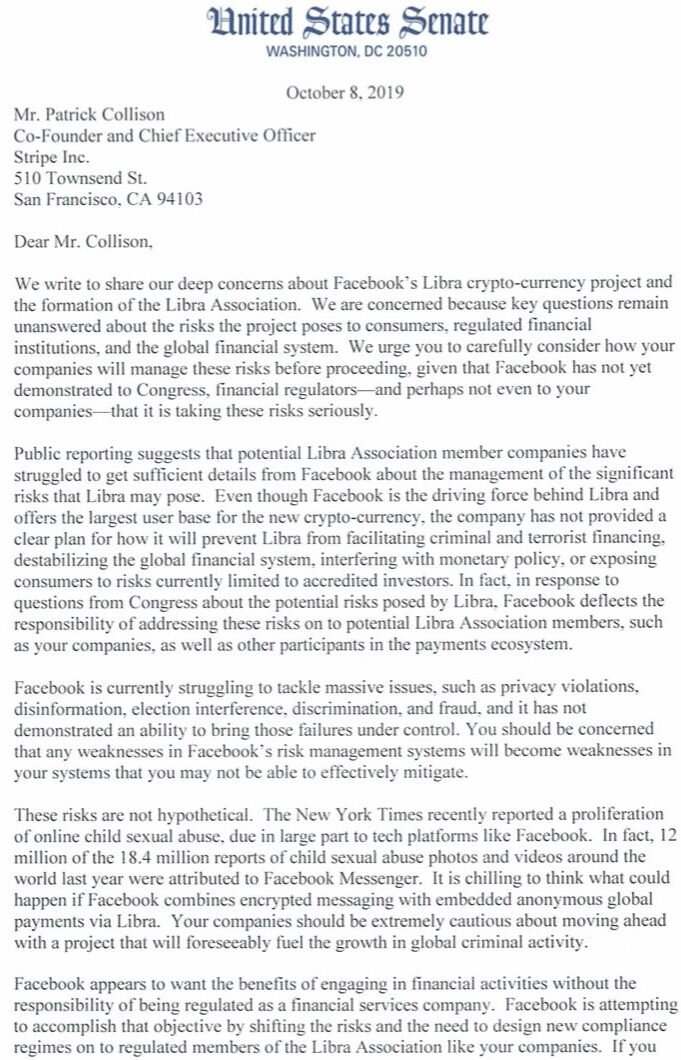 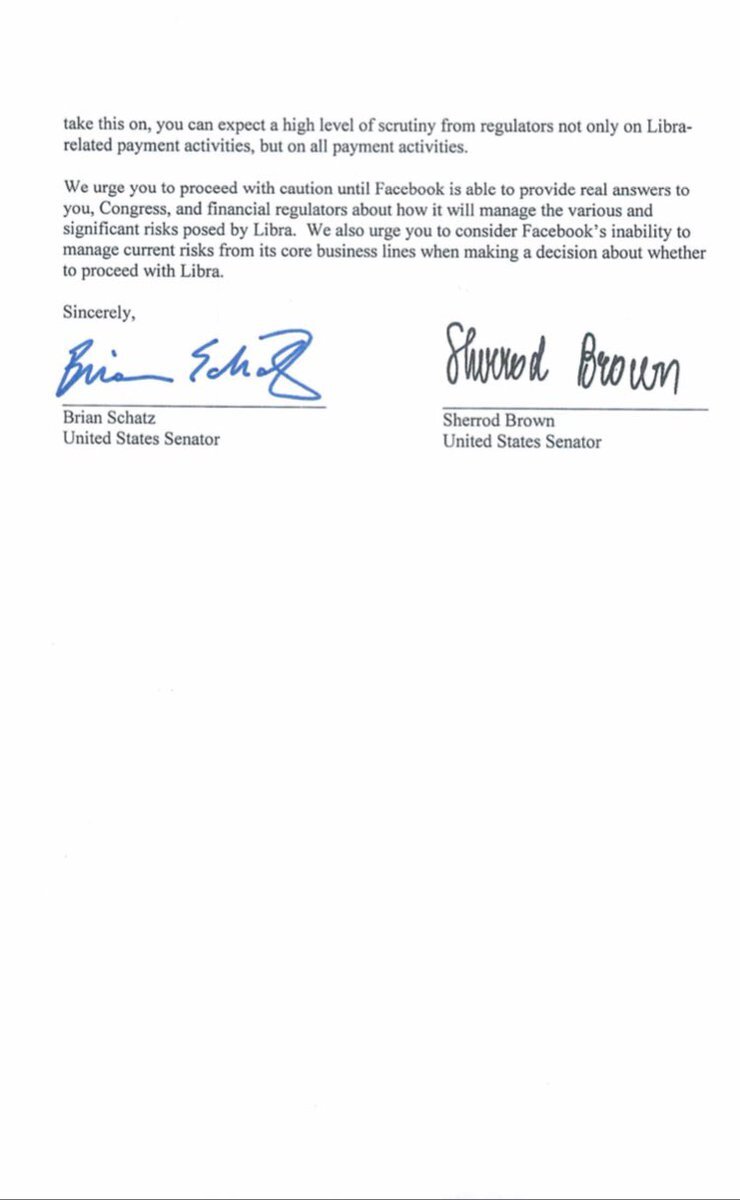 Last week, the spotlight on Libra and Facebook intensified as Mark Zuckerberg appeared before the House Financial Services Committee. Before we analyse the questions and answers, let’s stop and ask why Zuckerberg, if Facebook is only one member of the Libra Association? The answer to this is three-fold. First, it appears that Facebook has led the Libra charge. Initial job posts were made by Facebook as long as one year ago. Second, if politicians were looking to beat up the Libra project, Zuckerberg makes the perfect scapegoat. Third, Facebook have plans to develop Calibra, a wallet that can be used to send and store Libra tokens.

What did we learn from Zuck’s appearance?

While it was an ideal opportunity to learn more about Libra, unfortunately the episode was largely political. A number of members of Congress used the opportunity to grandstand and showboat, probing Zuckerberg about the Cambridge Analytica scandal and all the problems facing Facebook. One even asked Zuckerberg if vaccines were 100% safe and accused his platform of burying content from anti-vaxxers.

In amongst the rubble of political showmanship, there were some interesting insights into the concerns of politicians, as well as responses from Zuckerberg.

One such concern was the potential threat from Libra to the US Dollar.

“The dollar is very important to us as a tool, a tool of American power and also a tool of American values. We would much prefer to put sanctions on a country than send our soldiers there….When something threatens the dollar, we get very nervous”

Of course the power of the US Dollar isn’t just limited to a tool of influence, there are also financial concerns at losing the “money [that] pours into the US because of this.”

Republican Brad Sherman was perhaps Zuckerberg’s sharpest critic, comparing the functionality of Libra to the functionality of the US Dollar: “You’re trying to help those for whom the dollar is not a good currency: drug dealers, terrorists, tax evaders.” Referencing Libra’s initial aims of helping the unbanked, which admittedly Zuckerberg did less this time around, Congressman Sherman was on the front foot:: “the richest man in the world to come here and hide behind the poorest people in the world”

Republican Maxine Waters pointed out that Facebook initially banned crypto ads because they are “frequently associated with misleading and deceptive practices.” Facebook then reversed their decision, bought a blockchain company and announced Libra. “Tell us what changed. How did crypto currency go from misleading and deceptive last year, to become a means for financial inclusion this year. You change your policy when it benefits you.”

Not all committee members were negative. Senator Mike Rounds of South Dakota lent this support to the project, calling his colleagues’ ominous tone disappointing and expressing support for financial innovation.

How did Zuckerberg respond?

In response to the questions about the threat to the US Dollar, he landed a solid rebuke saying “if America doesn’t innovate, our financial leadership is not guaranteed.”

Zuckerberg repeatedly said Libra will not launch until it obtains the necessary approvals from US regulators. A number of committee members suggested he was bluffing, asking which regulators that will include. Zuckerberg deflected. Either he is genuine and there is a risk of Facebook leaving the Libra Association, or he and his lawyers know that there are indeed no significant regulatory hurdles.

There were suggestions of a design change to Libra. Initially the Libra coin would be backed by a basket of fiat currencies. We previously heard rumours which were strengthened during the hearing that there is a possibility that Libra might only be backed by USD, there will be a minimum percentage of US Dollar backing or there might be multiple crypto currencies for multiple fiat currencies. Some commentators have suggested that in light of concerns of the threat to the US Dollar, they will be surprised to see the basket of currencies survive.

We remain convinced that Libra will be a boon for crypto assets. Libra’s user base, their expertise in design and the attention surrounding the project will surely lead to greater crypto exposure and adoption. However, to say Libra faces an uphill battle would be an understatement. The regulatory scrutiny from politicians and regulators in the US and around the world continues to grow. Facebook has been unable to separate its poor image and reputation from the project, especially as it relates to privacy. The project is as much Facebook’s as it is the Libra Association’s, in a clear case of perception being greater than reality.

Zuckerberg also played the China card in his remarks, urging regulators to act quickly “While we debate these issues, the rest of the world isn’t waiting. China is moving quickly to launch similar ideas in the coming months,” he said

It was no coincidence that over the weekend, only days after Zuckerberg’s remarks, Xi Jinping, President of the People’s Republic of China said China should seize the opportunity to adopt blockchain. “We must take the blockchain as an important breakthrough for independent innovation of core technologies.”

The potential impact of this on crypto is also enormous, introducing crypto assets to China’s 1.3bn people. Bitcoin and Blockchain searches on Baidu (China’s Google equivalent) jumped significantly over the weekend. Perhaps this will have a greater impact on crypto than Libra.

It is unclear how President Trump and US politicians will respond to President Xi Jinping’s comments. Perhaps they will be brushed aside. Or perhaps the US just got the kick up the bum it needed, and the Libra Association just found their greatest cause for support.

Tim is the Managing Director at Apollo Capital. He has substantial expertise in both traditional financial services and technology investing. In financial investing, he worked at DMP Asset Management, a boutique Australian Equities Fund Manager, and was part of the investment team that managed a $33 billion super fund. On the technology side, Tim has worked as a venture capital Associate at Dominet Venture Partners and has been active in crypto markets for over four years. Tim is a CFA charterholder.